This week the final conference of the European project “Click for Support” organized by the LWL-Coordination Office for Drug-Related Issues took place in the city of Muenster, Germany. The project addresses the gap between the (digital) living environment of young people and the professional and personal background of drug prevention experts in regard to online communication. To narrow this gap, a guideline for web-based interventions for young drug users has been developed together with 26 partners from 13 European countries.

The fact that the European Monitoring Centre for Drugs and Drug Consumption (EMCDDA) has shown special interest in the project and has sent a representative to the final conference shows the project’s relevance and the need for further development of drug prevention in order to reach young people by using new media and modern technologies.

At the final conference the partners have met to make last adjustments to the guideline which will now be translated in ten European languages and disseminated in the partner countries and beyond. 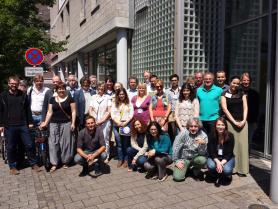